Showing posts from February, 2013
Show All

Nifty Retracement and Moving Averages along with Wave counts 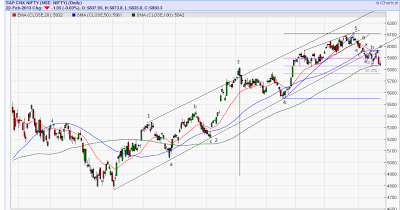 In our previous update we had mentioned  that move below 5880 will drag markets to 5820 over short term. Nifty on Thrusday shed gains with almost 100 pts and made a low of 5836 on Friday after failinf to cross 5970 on Wednesday. We had also mentioned that Nifty will come down to 5600 over medium term till February 28 or till March 02, 2013 which is the post pattern target. Now the only concern is the entire fall after the pattern breakout was corrective. For the target to achieve it should be an impulse move as it has to be in sync with time. Moving averages work very precisely in trending market. We are using 20 and 50 days moving average and we witnessed a bearish crossover as 20 day moving average crossed 50 sma from above which has turned the short term trend from positive to negative. Currently markets are hovering on the support of 100 sma, for a medium term trend to be bearish 50 sma and 20 sma need to cross 100 sma from above. We have taken retracement levels from w
1 comment
Read more

Nifty will not respect BULLS 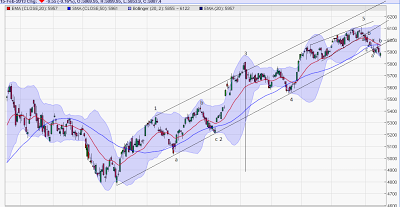 In our previous update we had mentioned that Nifty will move lower till 5700-5650 which is intact over medium term. As seen in the Daily chart , after giving a bearish break in a rising channel pattern, Nifty re-tested the lower trend line of the rising channel and made a Evening star (candlestick pattern) on 13th February and gave a confirmation by opening with gap down the next day. Currently Nifty is below both the Moving Averages. Short term moving average 20 EMA is on the brink to give a bearish crossover by cutting the 50 SMA from above which will confirm that the trend will be Bearish over medium term and  will drag down broader markets to our above mentioned target of 5600 over medium term. Now 5970 will act as a strong resistance as Nifty continue to hover below the lower trend line of the rising channel. A move below 5880 (closing basis) can pull prices lower till 5820 over short term. As per wave perspective, after completing wave v of wave 5 near 6112  prices m
1 comment
Read more 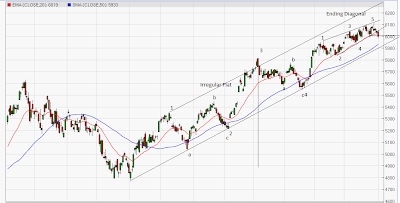 Anticipated on 3rd February 2013 Happened on 9th February 2013 We had mentioned in our previous update, " Nifty will now move lower and can test 50SMA which is placed at 5900 and lower trend line of the rising channel over short term." - Bang On!! After giving a bearish breakout in a rising wedge pattern prices moved lower as per our expectations and achieved our mentioned target. Nifty not only touched 5900 mark but closed below the lower trend line of the rising channel which was earlier acting as a crucial support. Nifty is quoting below 50 SMA for the first time after making a top at 6112 and it is imminent that there will be a bearish crossover of 20 EMA and 50 SMA soon which will infuse more selling pressure. In an Ending Diagonal Pattern prices retrace faster up to 1/4 to 1/2 the time taken for the entire pattern to form. So by the end of February, Nifty might test 5700-5650 or even lower till 5600. As per wave perspective, prices
1 comment
Read more

Nifty Elliott wave counts and its Target over short term 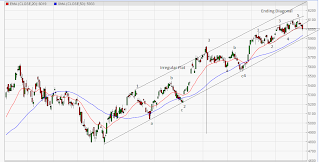 Nifty has given a break of an Ending Diagonal Pattern on Friday by closing below it s previous low thus shedding around 50 points. This suggest that down trend is on stealth and broader markets will now lose its charm. Indicators like MACD is in a sell mode and is moving in sync with the index. Momentum Indicator RSI faced the resistance at 70 and lost its strength, supported by multiple of negative divergence thus indicating that upside is capped. ADX has turned from 40 and -DI has crossed +DI from below which suggests negativity. Nifty is currently below 20 EMA which changed the short term trend from bullish to bearish. From wave perspective, in an Ending Diagonal pattern (Wedge) wave 4 will always enter in the territory of wave 1 which has happened in this case. Currently market has closed below its previous low which has not happened from past one month. The post pattern implication will be a 5 wave structure on downside and will retrace 50% faster of wave 4 of wave 5. Sm
1 comment
Read more
More posts