Nifty daily chart anticipated on 10th June 2022 Nifty hourly chart happened on 16th June 2022 I had mentioned that the index is wean and can falter going ahead. In my previous article I stated, " Nifty can falter towards 15450-15350 range over short to medium term." The index plunged and made a low of 15350 levels thereby achieving my above mentioned level- Anticipated Happened. To view my previous article on Nifty, click on the below link https://www.marketanalysiswithmeghmody.com/2022/06/nifty-and-road-ahead-with-elliott-wave.html As per Elliott Wave, prices have completed wave a of second correction and can move higher in the form of wave b of second correction post wave x. Corporate results is set to release in the month of July and so there are high chances for index to pull back. The summation is Nifty is all set to give a pullback which can only be possible above 15850 levels, leading it till 16200-16800 levels over medium term.
Post a Comment
Read more

MCX Crude Oil 60 mins chart MCX Crude Oil has soared to its all time high of 10000 levels in past 2 years from marking an all time low of negative figure, thus gaining 10000% returns, but the rally seems to have now formed a distribution pattern and has also reversed. This is an indication that selling pressure will intensify going forward. I had also mentioned in my previous article that 5th wave will move towards 10000-10200 levels as wave 5 has the tendency to fail, but still I managed to catch wave 5 from 8200 to 9600. From Waves perspective, prices completed wave 4 in a triangle pattern and wave 5 in an ending diagonal pattern. Also wave 5 is truncated, meaning a failure, where it failed to move above wave 3 as wave 1 was extended. There is a high possibility that prices will sink towards the level of 7500 over short term. The summation is MCX Crude Oil is set to sink till 7500 INR followed by 5000 INR over short to medium term. To view my previous article on MCX Crude Oil, click
Post a Comment
Read more

ETH/USD 240 mins chart Cryptos has witnessed one of the biggest bearish trend in its time. However, nothing lasts forever and this to will end. Prices in the above chart is moving in a falling channel indicating that the trend is negative, but for me it is not possible to come to a conclusion that it will falter from the current juncture. The Crypto has arrived near to the support of the falling channel and a resilience from here is likely. As per Elliott Wave, the fall from the top is a simple zigzag where wave a was an impulse followed by wave b and wave c down in an impulse. Wave a and wave c follow the rule of equality, so there is a high possibility for prices to either move up in wave x or a fresh rally will start.  The summation is ETH is all set to bounce from current levels and can test $2500 over short to medium term.
Post a Comment
Read more

DXY daily chart anticipated on 31st Jan 2022 DXY daily chart happened on 13th June 2022 In my previous article on Dollar Index, I had mentioned that , "  DXY has a support placed at 94.5, as far as it is protected, prices are likely to move till 102-105$ over medium term." Prices reached till 105 levels after the US inflation data shot up above 8% since past 40 years which will open aggressive interest rate hike by FED- Anticipated Happened. To view my previous article on DXY , click on the below link https://www.marketanalysiswithmeghmody.com/2022/01/dollar-index-dxy-elliott-wave.html From Waves perspective, prices are moving in a extended impulse wave and is all set to complete the upmove. The index is currently moving in wave v and is on the brink to complete this last leg which eventually lead prices to a corrective wave. USDINR is also moving in a distribution pattern and can reverse anytime soon. To view the article on USDINR, click on the below mentioned link. https:/
Post a Comment
Read more 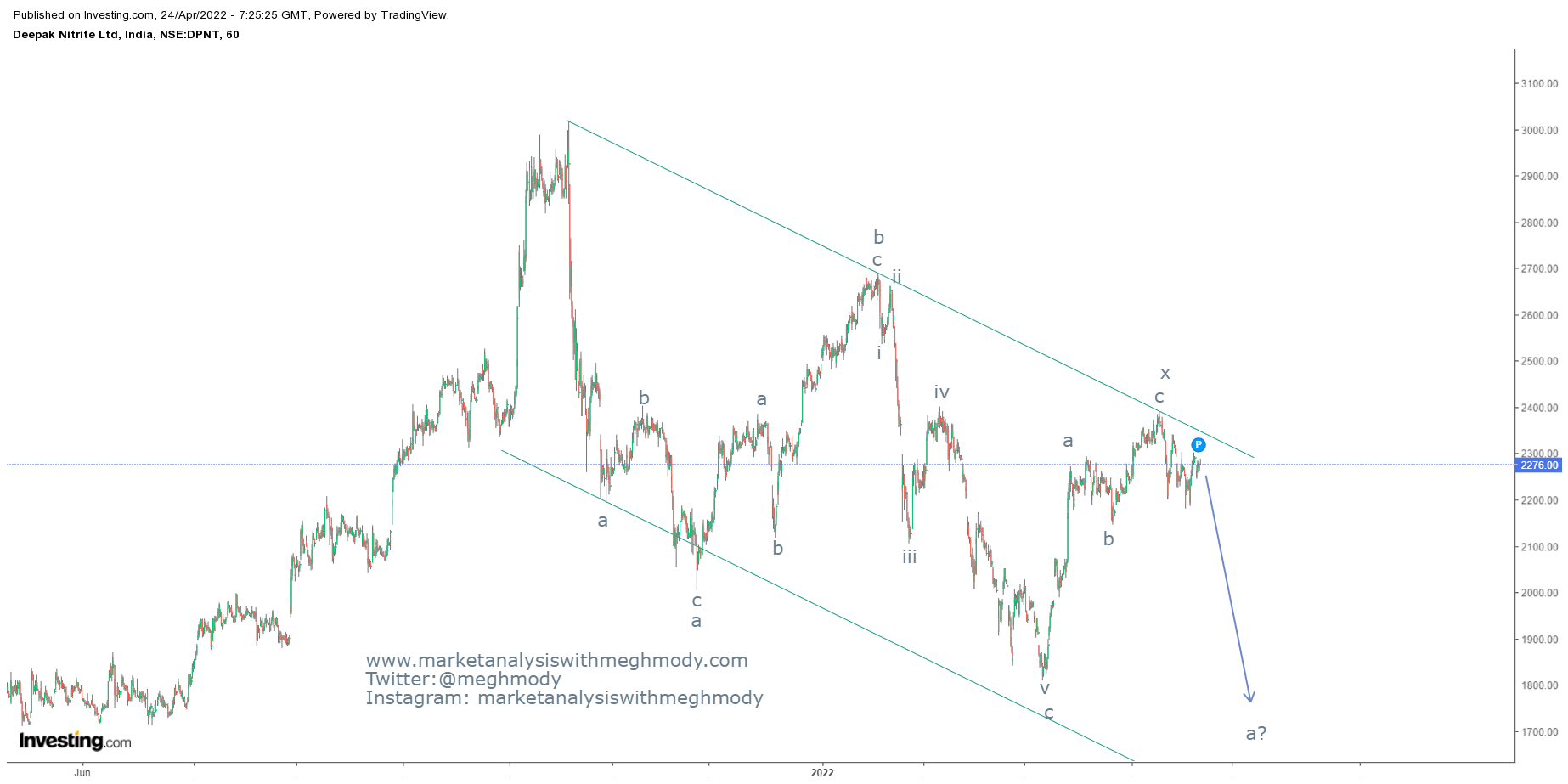 Deepak Nitrite 60 mins chart anticipated on 24th April 2022 Deepak Nitrite 60 mins chart happened on 10th June 2022 In my previous article, I had reiterated, " Deepak Nitrite can sin to the level of 1800-1750 levels over short term with the resistance placed at 2400." The stock plunged below 1750 levels on 10th June 2022 thereby achieving my above mentioned levels - Anticipated Happened To view my previous article on Deepak Nitrite, click on the below mentioned link https://www.marketanalysiswithmeghmody.com/2022/04/deepak-nitrite-elliott-wave-analysis.html As per Wave theory, prices have either completed wave a after wave x in double correction or it has completed wave c of a normal correction (a-b-c). In both the scenarios there are chances for the stock to show a relief rally.
Post a Comment
Read more

Nifty and the road ahead with Elliott Wave

Nifty daily chart As per the above chart, prices are moving in a lower highs and lower lows and it is precisely moving in a falling channel. The index is negatively poised on the back of various reasons, one of them is the rate hike by US FED.  Wave theory suggests that the index is suppose to falter below its recent low of 15730 and can reach towards 15450-15350 levels over short term. I earlier thought that wave a is corrective but it can also be impulse and that is why I believe that wave v of wave a can reach towards the support of the falling channel. The summation is Nifty can falter towards 15450-15350 range over short to medium term.
Post a Comment
Read more
More posts