Showing posts from March, 2016
Show All

- March 27, 2016
The next tutorial for Elliott Wave and Neo wave concepts will be scheduled on 23rd and 24th April 2016. This will be a webinar set for two days 6 hours each. The course fee will be 6000/- for two days. Requirement for Webinar w ill be Team Viewer 7, Yahoo messenger and Headphone and Mic. Interested candidate can mail me for further details on meghmody@gmail.com
1 comment
Read more

MCX Silver: The direction ahead?

We were continuously saying that USDINR is expected to dip till 66.50 levels from 14 th March 2016. On Friday, “we will continue to be negative for this pair as it can move down till 66.50 or even lower.” the pair closed at 66.50 levels- Anticipated happened. As shown from the above daily chart, the major trend continues to be positive for this pair as it is moving in a higher high and higher low formation and prices are persisting in the rising channel. To change the trend from positive to negative, it is imperative for prices to break the rising channel and also break the level of ... decisively From wave perspective, the pair has opened wave ... on the downside. Wave ... is ... in nature and will have ... waves in it.  In short,...... USDINR Daily anticipated on 6th March Happened on 18th March 2016.
Post a comment
Read more

- March 13, 2016
The next tutorial for Elliott Wave and Neo wave concepts will be scheduled on 26th and 27th March 2016. This will be a webinar set for two days 6 hours each. The course fee will be 6000/- for two days. Requirement for Webinar w ill be Team Viewer 7, Yahoo messenger and Headphone and Mic. Interested candidate can mail me for further details on meghmody@gmail.com
Post a comment
Read more 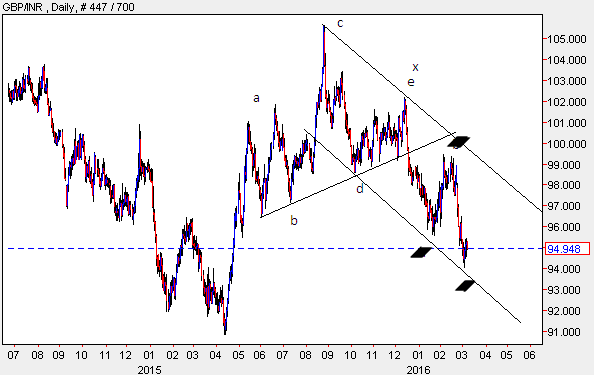 This excerpt is taken from our daily publication "The Forex Waves" dated 8th March 2016 , In which we had mentioned that “ resilience can be observed in this pair which can take prices near till 96.60 levels over short term.” The pair on 11 th March 2016 made a high of 96.61 thus achieving our above mentioned level. GBPINR which is negatively poised is currently showing some strength in order to relieve from the oversold zone. It can possibly reach near to the resistance of the falling black channel which is placed at ... levels. As per Wave theory, prices are moving in a .... pattern. The current up move is slow which can be termed as wave .., also it is corrective in nature. This leg can extend going ahead as it is clear that wave ... of wave ... has open up. In short, we will continue to be .... in this pair as it can move near to ... levels. GBPINR Anticipated on 8th March 2016 Happened on 11th March 2016
Post a comment
Read more

In last six sessions USDINR has dropped from 68.80 to 67.07 levels thus shedding 2.51%. However, the channelized move continue to suggest that the trend is positive, but it is clearly stating that the channel support will be tested and can possibly break going ahead. Last week the retracement from the top was faster, thus engulfing previous four week bars on weekly charts, indicating that the trend has changed from positive to negative for this pair. The next support will be at 66.50 levels. Any move below the support of the channel will open further negative possibilities and can start stealth bear trend. From wave perspective, prices from the bottom of 2014 till the top of 2016 moved in a complex correction pattern. The recent three legs before the steep fall completed wave... of wave ... of wave... Now the next leg on downside has started. In short, after breaching 67.50 levels, prices now can test the level of 66.50 going ahead. Any move below .... will make this pair
Post a comment
Read more 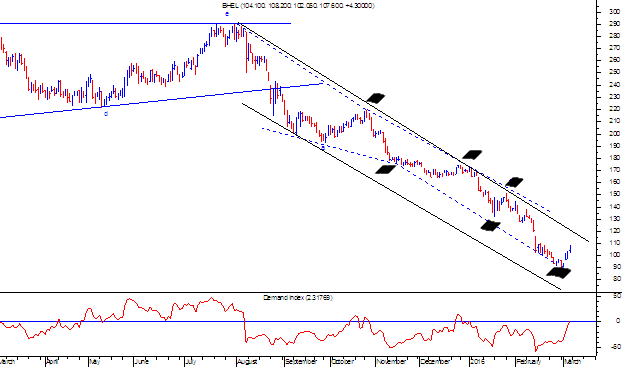 As shown below in the daily chart,  BHEL has shed almost 70% from its top of 289 made in July last year. However, in last three trading sessions prices have started moving higher by crossing its previous day high. The Demand index which is a leading indicator of prices change is also above the level of 50 thus indicating change in price trend. As per Wave theory, prices moved down in a ... leg formation, particularly known as ... . It probably completed its ... at the level of ... and has started moving in a .... In short, as far as prices are above ... levels, expect prices to move till ... levels over short term Daily Chart of BHEL We are now coming out with 2 day paid course of Elliott Wave and Neo wave theory. It will 14 hours session equally divided in 2 days. The session will be on 12th and 13th March 2016. The course fee will be 6000/-. It will be a webinar. The requirements for the webinar will be Team Viewer 7, Yahoo messenger and Headphone and Mic. I
5 comments
Read more
More posts