Showing posts from April, 2016
Show All

MCX Copper tumbled till 306 levels from the top of 343 levels. On 12th April prices showed resilience and retraced faster giving an indication of reversal. From wave perspective, prices are moving in a flat pattern (3-3-5). Where a was completed at 343.40 and wave b which retraced more than 61.8%, completed at 306. It can be said now that wave c of flat pattern has started and can move near till 343 levels. In short, expect MCX Copper to reach till 340-343 levels over short term. MCX Copper 1st month Contract (daily)
1 comment
Read more

From the daily chart of IDFC, prices consolidate before the mammoth move till 43. Prices are moving in a declining channel but the stock was near the support of the channel thus indicating a short term bounce. From Wave perspective, prices completed  the last leg of a complex correction wave y. In wave y it completed diametric pattern and started a new leg on the upside. IDFC Daily Chart The next tutorial for Elliott Wave and Neo wave concepts will be scheduled on 23rd and 24th April 2016. This will be a webinar set for two days 6 hours each. The course fee will be 6000/- for two days. Requirement for Webinar w ill be Team Viewer 7, Yahoo messenger and Headphone and Mic. Interested candidate can mail me for further details on meghmody@gmail.com
Post a Comment
Read more 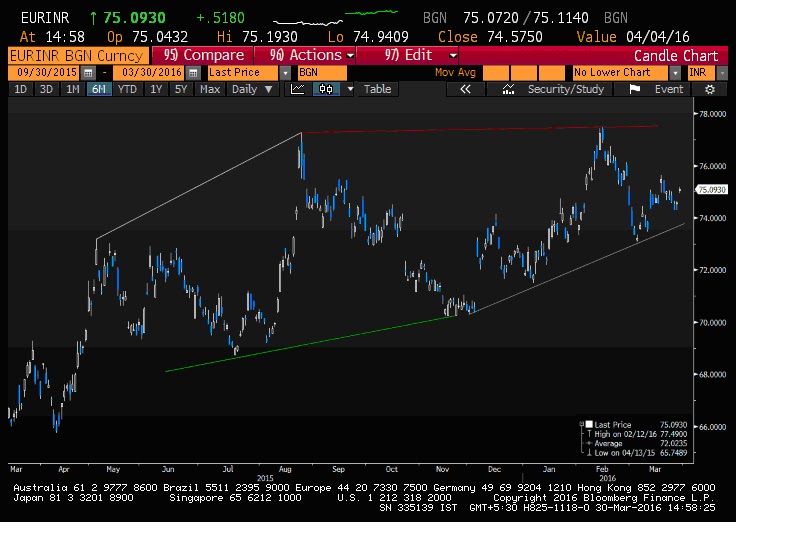 EURINR is moving in a positive direction after forming a bottom of 65.74 on 13 th April 2015. As of now prices are moving in stiff range of 74-77 levels. Currently the pair is protecting the level of 74 and can move closer till 76.70-77 levels over short term. Faster retracement from the top will give first indication of a reversal, followed by breaking of 74. A sustainable move below 74 will open the possibility of 69-70 levels over medium term (2-3 months). From wave perspective, EURINR is moving in a diametric pattern, which has seven legs in it (a-b-c-d-e-f-g). Diametric formation is a complex structure which is difficult to identify, as at first it will look like a expanding triangle and then it will form contraction. Currently EURINR is in the last leg of diametric pattern which is wave “g”. This wave is corrective in nature though it can also form more complex structure going ahead. To conclude, EURINR is expected to move higher closer to 76.80-77 levels in near term
Post a Comment
Read more
More posts